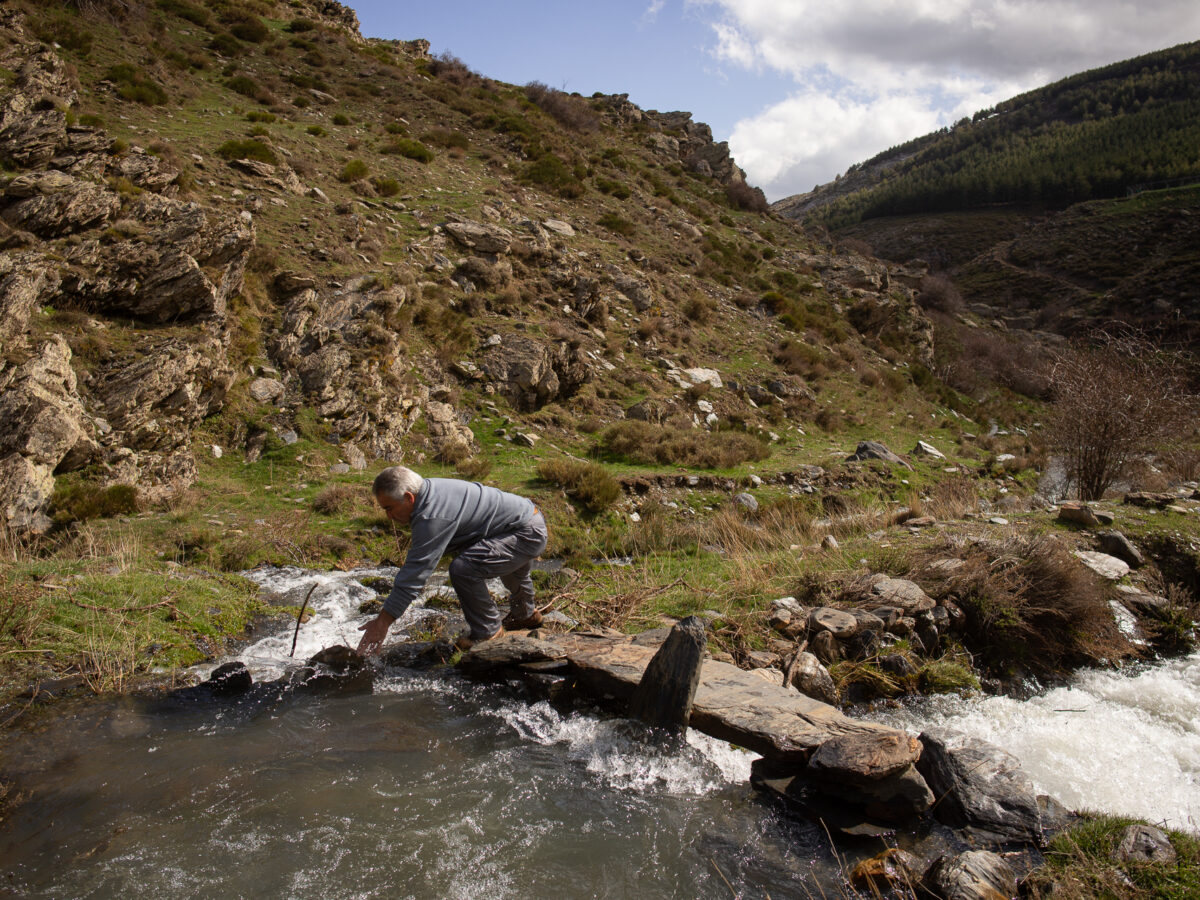 “Sowing water” in this mountainous region has been crucial for people, crops, and biodiversity for more than a millennium.

HIGH ABOVE THE WHITEWASHED VILLAGE of Bérchules, nestled in the folds of southern Spain’s Sierra Nevada, Antonio Ortega García adjusts plate-sized slabs of stone in an irrigation channel as water rushes past. It’s mid-spring—the sun strong, the wind brisk—and Ortega is busy monitoring the direction of water, making adjustments to its course as needed. Where water flows now determines where it will eventually emerge on the slopes below. A couple miles downstream, the channel pours into a meadow, where it branches into rivulets that soak the mountain as they run down its side. “Day, night, day, night. The earth is like a sponge,” says Ortega.

The channel, known as an acequia—derived from the Arabic as-saqiya, meaning “water conduit” or “water bearer”—is part of a vast 1,800-mile irrigation network built throughout the Sierra Nevada between the eighth and 10th centuries by the Moors in what was then Al-Andalus. Acequias were designed to preserve and distribute scarce water resources in the semi-arid environment, and were key to the survival of agrarian communities, allowing the wealth of crops introduced by the Moors—eggplant, citrus, pomegranate, spinach, and walnut, to name a few—to flourish.

Today, this ancient water management system—the oldest in Europe—continues to sustain farmers and villages across the Sierra Nevada, channeling snowmelt and rainfall runoff from the mountain peaks to the terraces, pastures, orchards, and gardens below. As climate change intensifies, acequias will play an even more important role in helping communities like Bérchules cope. “Water for us is life. A village with water is a village with wealth,” says Ortega. But as the number of people skilled in managing acequias dwindles, the future of the entire system is in question—even as the need for the water it provides has never been greater.

Water scarcity in southern Spain, one of Europe’s driest and most climate-vulnerable regions, is worsening. Summers are getting longer and hotter. Winters, milder and drier. Droughts, more severe. Because of their efficient use of water and importance for small-scale sustainable forms of agriculture, acequias are considered a crucial tool to mitigate and adapt to the region’s changing climate. They provide other benefits, too, including a steady supply of water that boosts biodiversity, from plants to amphibians to pollinators. Ortega says Bérchules is not suffering as badly from climate change as other parts of Spain, but knowing this could—and likely will—change, he obsesses over how acequias could be further improved.

When the spring thaw begins, snowmelt is diverted from rivers high in the mountains to earthen channels varying from yards to miles in length. Water runs through the gently descending acequias until it reaches an area known locally as a calaero where it infiltrates the ground, a process known as “sowing water.” As water slowly seeps through the subsoil, it recharges aquifers and feeds springs and streams that originate further down the mountain. From knowledge that’s been passed down over the centuries, people that tend the acequias, including Ortega, know the paths that water takes underground and where it will show up downslope, where it can be “harvested” to irrigate crops throughout the parched summer.

Without calaeros, agriculture in this rugged area would not exist as it does now. The region’s rivers are steep and swift, rendering most irrigation methods impractical. Sowing water slows its flow down the mountain, ensuring its availability come the dry season. Research has proven the process of sowing water “doubles the flow of rivers in summer months,” says Sergio Martos-Rosillo, a hydrogeologist at the Spanish Geological Survey. “Imitating nature to manage water…allowed [inhabitants] to overcome all the climatic and social changes over the last 1,200 years.”

It’s an efficient and resilient system—but maintaining it requires specific, increasingly rare knowledge. The 1960s and ‘70s saw widespread rural depopulation as people migrated to cities across Spain and Europe in search of jobs and stability. Many acequias throughout the Sierra Nevada were abandoned and fell into disuse. Those who left took ancestral knowledge transmitted from generation to generation with them.

Compared to many others, the village of Bérchules fared better. Although its population shrank, its main acequia has continued to flow from the Middle Ages to the present day, irrigating crops of zucchini, beans, eggplant, and pumpkins, and providing water to the nearby valley and fertile plains, fattening almond, lemon, and olive trees.

Five years ago, Ortega became president of the local irrigation community, a role he fits in around construction work in winter and tending his cherry tomato patch in summer. Acequias are a communal system, underpinned by principles of equity and trust, with shared responsibility for cleaning and maintaining them, which strengthens social ties. As president, Ortega must ensure the 600 community members with water rights receive their fair share.

In recent years, efforts to recover abandoned acequias and related traditional knowledge in the Sierra Nevada have grown. A project established by the University of Granada in 2014 has restored 14 acequias and cleaned 30 more. Yet further restoration is hampered by a lack of support for acequias. “There’s no money,” says José María Martín Civantos, an archaeologist and medieval historian at the University of Granada, who coordinates the project. “They’re completely undervalued.”

Civantos says the lack of support is linked to the continued trajectory towards high-tech industrial agriculture, considered competitive and productive, while traditional irrigation systems are cast off as being inefficient. Both Civantos and Ortega say this perception reveals a lack of understanding of how acequias work and the many benefits they provide to humans and the environment.

Other factors threaten acequias, too. The low profits of small-scale agriculture, which can’t compete with the industrial model. The long-standing prejudice towards rural areas and agrarian activities. And the lack of acknowledgment from society, which Ortega in turns laments and jokes about. “We should go to the coast for a couple of years,” he grumbles, then adds, “Let’s see how the rivers would be.” All contribute to continued rural exodus. As a result, “lack of generational turnover is a real problem,” says Civantos.

As beneficial as they are, without enough people willing to carry this practice into the future, acequias will struggle to survive the present.

Watching water spill into a calaero—the Mediterranean Sea in the distance, and beyond it the peaks of Morocco’s Rif Mountains—Ortega says he is hopeful the system will survive. Despite the difficulties, there’s interest among some local youth to learn about and help maintain acequias. “As long as there’s life in the village,” he says, “knowledge will be passed on.”

END_OF_DOCUMENT_TOKEN_TO_BE_REPLACED 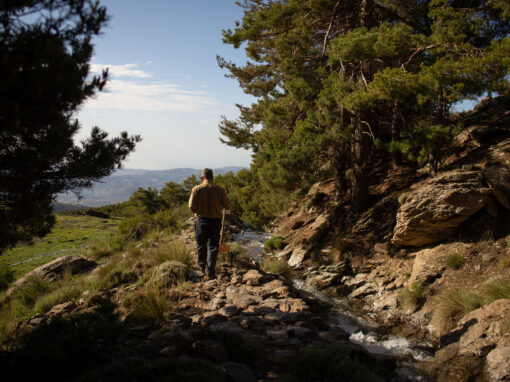