On the frontline of war, Yemeni women are building peace | Equal Times 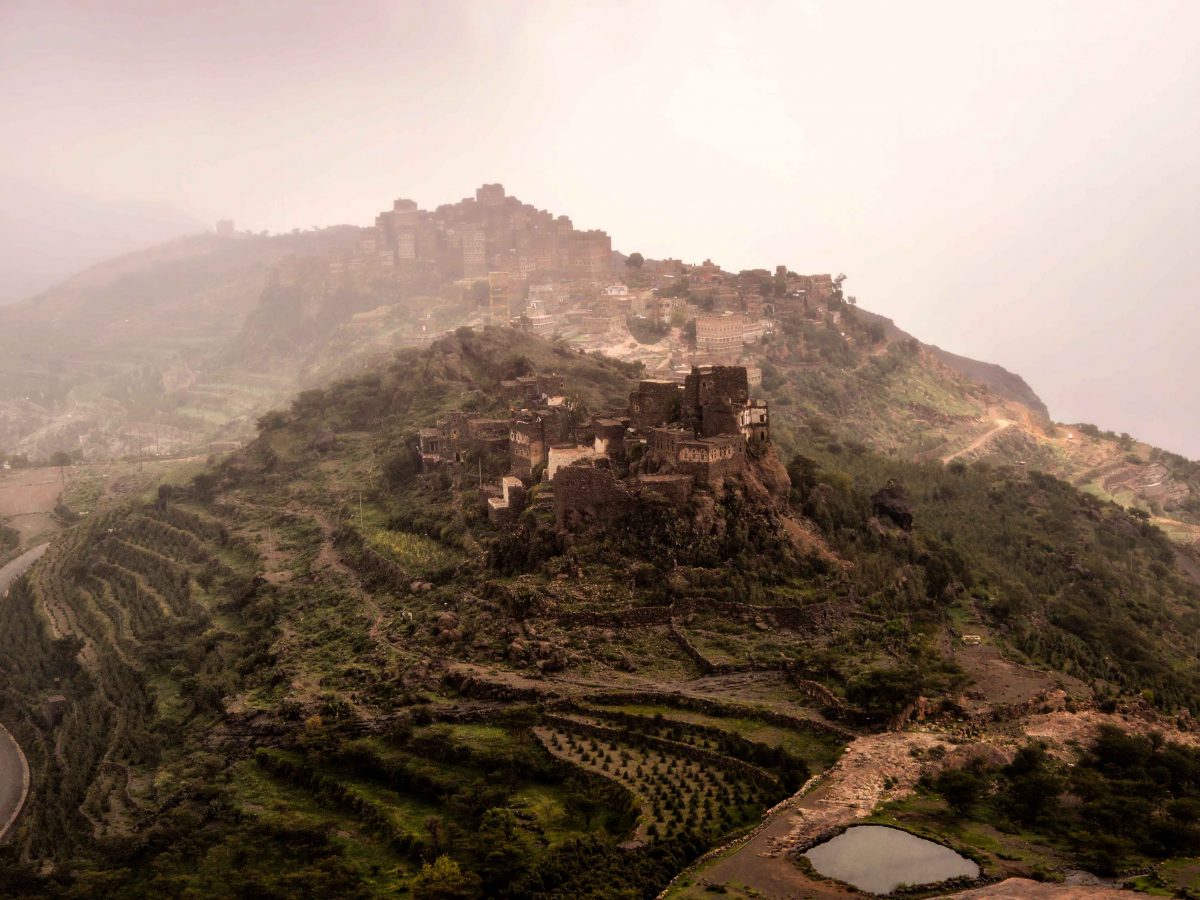 The lived experience of those most affected by war, and those working hardest to end it, has led to a tangible understanding that without women, there can be no just peace in Yemen.

It was the third year of the war when Muna Luqman heard of a conflict over water in Al-Haymatain, a remote area of Yemen’s Taiz governorate well-known for disputes over the scarce resource. Two communities had taken up arms, and were threatening each other, but had not started fighting. Luqman, a peace activist and founder of Food4Humanity, a women-led civil society organisation that provides emergency relief, training and livelihood programmes, sent in a team of engineers to see what could be done.

She then instigated a mediation process between 16 community representatives, who signed a local peace agreement, and formed a council to prevent future water conflicts. Through funds raised entirely by women in the Yemeni diaspora, Food4Humanity repaired the local water station, which now provides clean water for more than 10,000 people. At the end of March, Luqman mediated another water conflict in Taiz governorate. The situation, she says, was exactly the same. “It shows you how local initiatives, when they come together, can have a lot of impact, especially when led by women.”

Twenty years ago, the United Nations Security Council passed Resolution 1325, which recognised the vital role of women in achieving peace and security. However, when it comes to Yemen, the UN has failed to ensure that women have a role shaping the future of their country. Despite the crucial work of Yemeni women building peace on the frontline of war, their efforts have been ignored and not adequately supported, and they remain excluded from crucial peace negotiations.

The conflict in Yemen began following a failed political transition, when the Houthis pulled out of the national dialogue process in 2014, seized the capital Sana’a and ousted the new leader Abd-Rabbu Mansour Hadi the following January. The Yemeni government, exiled in the port city of Aden, requested its allies Saudi Arabia and the United Arab Emirates to launch an air and ground campaign to drive out the Houthis, escalating the conflict.

The fighting between the Houthi rebels and the Saudi-led pro-government coalition, armed and supported by the United States, the United Kingdom and France, has not stopped since.

Over five years of war have killed an estimated 112,000 people or more, displaced over 3.8 million people (three-quarters of whom are women and children), left eighty per cent of the population requiring humanitarian assistance and pushed half the country to the brink of starvation, in what is considered the worst man-made humanitarian crisis in the world.

Medical, water and sanitation infrastructure have repeatedly been targeted during the war, and UN human rights experts believe all conflict parties have committed war crimes. Only half of Yemen’s healthcare facilities are currently operational, while 17.8 million people lack access to clean water for drinking and sanitation – conditions which enabled the largest and fastest spreading cholera outbreak in modern history.

Yemen recently confirmed its first case of COVID-19, and humanitarian organisations have warned that the country’s decimated healthcare system will not be able to cope with the pandemic, and that the impact will be catastrophic. “In Yemen, we cannot advise people to wash their hands with soap and water, because there is neither enough soap, nor much access to water,” Luqman tweeted.

Two weeks after the UN secretary-general António Guterres made a global appeal for a ceasefire to slow the advance of the pandemic, the Saudi-led coalition has declared a two-week unilateral ceasefirestarting 9 April in a bid to prevent the spread of COVID-19. The UN has called on the Yemeni government and the Houthis to immediately cease hostilities, but it is unclear if the latter will observe the truce.

The double burden of water scarcity and war

Since the war began, gender-based violence has increased 63 per cent, while families driven further into poverty increasingly turn to child marriage as an economic coping strategy. A study by UNICEFfound that over two-thirds of girls are married before the age of 18. Gender-based violence is but one way women are disproportionately impacted by conflict, which intensifies pre-existing patterns of discrimination; women are also affected more by food insecurity, stress, declines in health services, poor sanitation and hygiene, and reduced water access.

Traditional gender roles and responsibilities around water, in particular, create additional threats to the physical health and safety of women and girls in Yemen.

Their needs and interactions with the resource are also different, says Leonie Nimmo, project coordinator and research associate at the UK-based Conflict and Environment Observatory, which has been studying the impact of the conflict on water resources in Yemen.

Women and girls are tasked with collecting water, often from distant sources, which puts them at greater risk of violence and injuries. Women and girls are most in need of clean water and sanitation facilities. And women are most at risk of death from disease when pregnant, breastfeeding or malnourished, or because of their role as caretakers. Therefore, it is essential for water interventions to factor in gender-related impacts, be sensitive to the situation on the ground and conscious of social norms, says Nimmo. “Otherwise they won’t be efficient and they won’t work.”

Access to clean water is fundamental to reducing poverty, breaking cycles of violence and improving the health and well-being of Yemeni women and girls. All the more so as climate change is predicted to further increase pressure on Yemen’s water resources, and environmental degradation has been found to drive or exacerbategender-based violence.

At the forefront of peacebuilding

Undeterred by the disproportionate challenges they face, Yemeni women have taken the lead in peacebuilding at the community level, says Rasha Jarhum, founder and director of Canada-based Peace Track Initiative, which aims to localise and feminise peace processes in the Middle East and North Africa, with a focus on Yemen.

Women have been negotiating ceasefires, opening humanitarian corridors, providing aid and mediating disputes over land and water resources, among other issues. In turn, their work on the ground builds trust, and establishes knowledge of community needs, an understanding of which is indispensable when it comes to peacebuilding. For Luqman, women have a greater interest in responsibility-sharing, while male-dominated conflict parties focus only on power-sharing.

Luqman says Yemen, one of the most water-scarce countries in the world, has always had water disputes; an estimated 2,500 people die annually due to water-related conflicts in the country.

However, her experience mediating the conflict in Taiz sparked a realisation that water need not be just a cause of conflict – it could also be an entry point for peace – and Food4Humanity launched Water4Peace, an initiative to empower women and youth to bring their communities out of dispute and poverty by providing access to close, clean water, awareness programmes and income-generating projects. “You give them an incentive for peace instead of violence, through water,” she says.

Water, Nimmo agrees, is fundamental to peacebuilding. “Any peace that doesn’t address the issue of water is not going to be sustainable or just.”

However, the threats Yemeni women face for their work are many, including physical attacks, arbitrary detention, gender-based and sexual violence, forced confessions, torture and defamation. “The current women’s rights situation is the worst we have ever witnessed in Yemen,” says Jarhum.

No women, no peace

A growing body of research shows that women’s participation in peace processes leads to better outcomes: parties are more likely to reach and implement an agreement, and peace is more durable as women’s inclusion brings a different understanding of conflict, diversifies the range of voices heard and enhances the perceived legitimacy of the process.

Only recently have Yemeni women started gaining recognition for their peacebuilding efforts, due to international advocacy. The turning point, Luqman says, came when Yemeni women secured the release of 600 detainees, while none had been released through the UN-led process. “People began listening to us, when they started seeing how women could be impactful.”

For Luqman, the problem is the way the process is built to exclude women completely, and which fails to see women as a priority, which she pointed out in her 2019 briefing to the UN Security Council: “We are frustrated because… women’s role in peacebuilding continues to be ridiculed, and women who are the real peacemakers, continue to be excluded in the ceasefire and peace process.”

Jarhum, who also briefed the UN Security Council, agrees, and thinks the exclusion of women can also be traced to the one-dimensional portrayal of Yemeni women as victims in Global North fundraising to secure donor support. This victimisation, she says, obscures what women do every day on the ground, and creates the erroneous perception that Yemeni women in general are not qualified. “We need to support them without making them look like passive victims.”

Double standards rooted in global patriarchy are at play, too. While the bar is low for men’s qualifications, when it comes to the participation of women, Jarhum explains, they have to meet very high, and often very difficult, criteria.

Moreover, the UN-led peace negotiations are failing to do their part to ensure women are equally represented by limiting them to a consultative role. Yemeni women, Luqman says, do not want to be merely consulted. “We want to be in the negotiations, because the decisions that are made there affect all of us.”

The UN Special Envoy to Yemen, Martin Griffiths, told Jarhum that while he will request that negotiating parties include women, he will not impose a quota. Jarhum, however, does not think national actors will follow through on their commitments to include women if it is not imposed. “There needs to be international and envoy pressure.”

Against these obstacles and more, Jarhum says Yemeni women are done waiting for an invitation to be included in the peace negotiations. “We’re going to claim the space and send our own delegation.”

The lived experience of those most affected by war, and those working hardest to end it, has led to a tangible understanding that without women, there can be no just peace in Yemen.

As Luqman highlighted when she briefed the UN Security Council: “There is no excuse any longer for continuing to exclude women except a poorly designed peace process.”