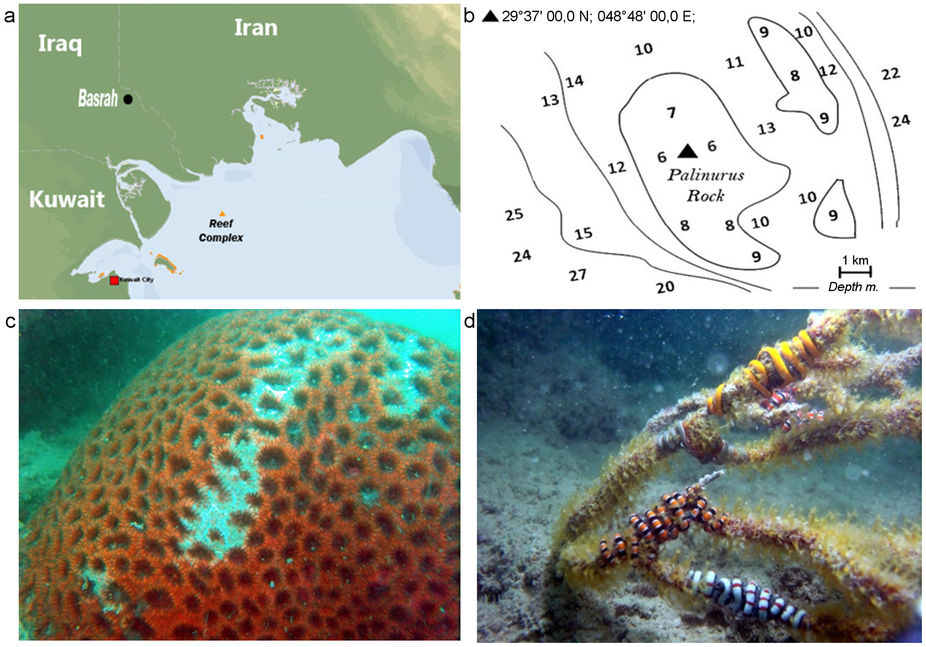 Coral reef found off the coast of Iraq, despite sediment, pollution and high sea temperatures, widens scope of country’s biodiversity.

BASRA, Iraq – In the warm, murky waters of the Gulf, off the coast of Iraq, a group of marine scientists have made an important and surprising discovery: A living coral reef.

The discovery has sent ripples through the international scientific community, as coral reefs were previously thought to be nonexistent in the abnormally warm, sediment-laden and often oil-polluted coastal waters of Iraq.

The team of German and Iraqi researchers behind the find noted that the discovery is significant and indicates that the biological diversity of Iraq’s coastal waters is greater than was thought in an area that, “has witnessed extensive historical impacts from a number of significant environmental, climatic, and human stressors.”

The coral reef complex was discovered during a scientific dive expedition in the Gulf by a joint team of researchers from the Marine Science Center of the University of Basra and the Scientific Diving Center of Freiberg University of Mining and Technology in Germany.

The team, led by Thomas Pohl of Freiberg University, published their findings this month in the academic journal Scientific Reports.

Though coral reefs have been documented in other areas of the Gulf, it was generally thought that they were absent from Iraq’s narrow 58 kilometer stretch of coastline, because of the harsh local environment.

The Gulf is thought to be the hottest sea on earth, with seawater temperatures frequently exceeding the tolerance levels of most corals.

As the location where the Shatt Al-Arab, the confluence of the Tigris and Euphrates Rivers, empties into the Gulf, Iraq’s coastal waters are extraordinarily heavy in nutrients and sediment. Such conditions are not favourable to the growth and survival of healthy coral reefs – another reason the discovery is so surprising.

The team of researchers hypothesized in their study that the low visibility of the murky waters is what may have prevented satellite observations from previously detecting coral reefs off the Iraqi coast.

The challenges presented by the natural environment are compounded by a host of local human-related threats, according to a report compiled by Basra University’s Marine Science Center after the discovery.

Oil and gas activity, oil spills, ill-planned coastal development, unsustainable fishing practices that are destructive to coral beds, poor waste management and an overall deterioration of water quality are all factors that create a difficult environment for the Iraqi coral reef to survive in, let alone thrive.

Despite this, Pohl and the research team noted that they expect there are more coral reefs waiting to be discovered in Iraq’s coastal waters.

Known for their beauty, the importance of coral reefs extends far beyond their aesthetic value.

Coral reefs are one of the most diverse and valuable ecosystems on earth, and play a vital role in water filtration, fish reproduction, shore line protection and erosion prevention – all of which benefit humans immensely.

The World Resources Institute (WRI) reports that although coral reefs occupy less than one quarter of one per cent of the entire marine environment, they provide a home for more than 25 per cent of known marine fish species.

As the foundation of many of the underwater world’s food webs, the discovery is good news for Iraqi fishermen, who may see significant increases in their catches if the coral reefs are adequately protected.

Forty-nine per cent of Iraq’s fish species are reef dependent and, according to the WRI, if properly managed, each square kilometer of coral reef yields an average of 15 tonnes of fish and other seafood per year.

The Iraqi reef, found at depths of seven to 20 meters below the surface, measures nearly 28 square kilometers.

Increased catches could also help mitigate food insecurity in Iraq, where the United Nations says nearly six percent of people are food deprived and a further 14 per cent of the population are vulnerable to food insecurity.

Despite their immense importance ecologically and the trove of benefits that coral reefs provide to humans, the future does not bode well for them.

The World Wildlife Fund reports that approximately one-quarter of the world’s coral reefs are already thought to be damaged beyond repair, with another two-thirds under serious threat from destructive fishing practices, overfishing, careless tourism, pollution, sedimentation, coal mining and climate change.

Scientists estimate that by 2030, as many as half of the world’s coral reefs could be lost.

The study by Pohl and colleagues notes the urgency of protecting and conserving such valuable habitats in Iraq, but that doing so will not be smooth sailing:

“This is a particular challenge (for) the Gulf area due to the extensive oil and gas exploration. Countries formerly experiencing major disputes now share common marine habitats, opening the door for political as well as scientific action. Monitoring these rare reefs will require intense communication between experts from many nations, and the results will have global implications.”

Broder Merkel, one of the study’s German researchers and the head of  Freiberg University’s Scientific Diving Center, told Nature Middle East last week that two further Iraqi-German expeditions are being planned, but that “Much more intensive underwater research is needed.”

This story was first published by Rudaw.