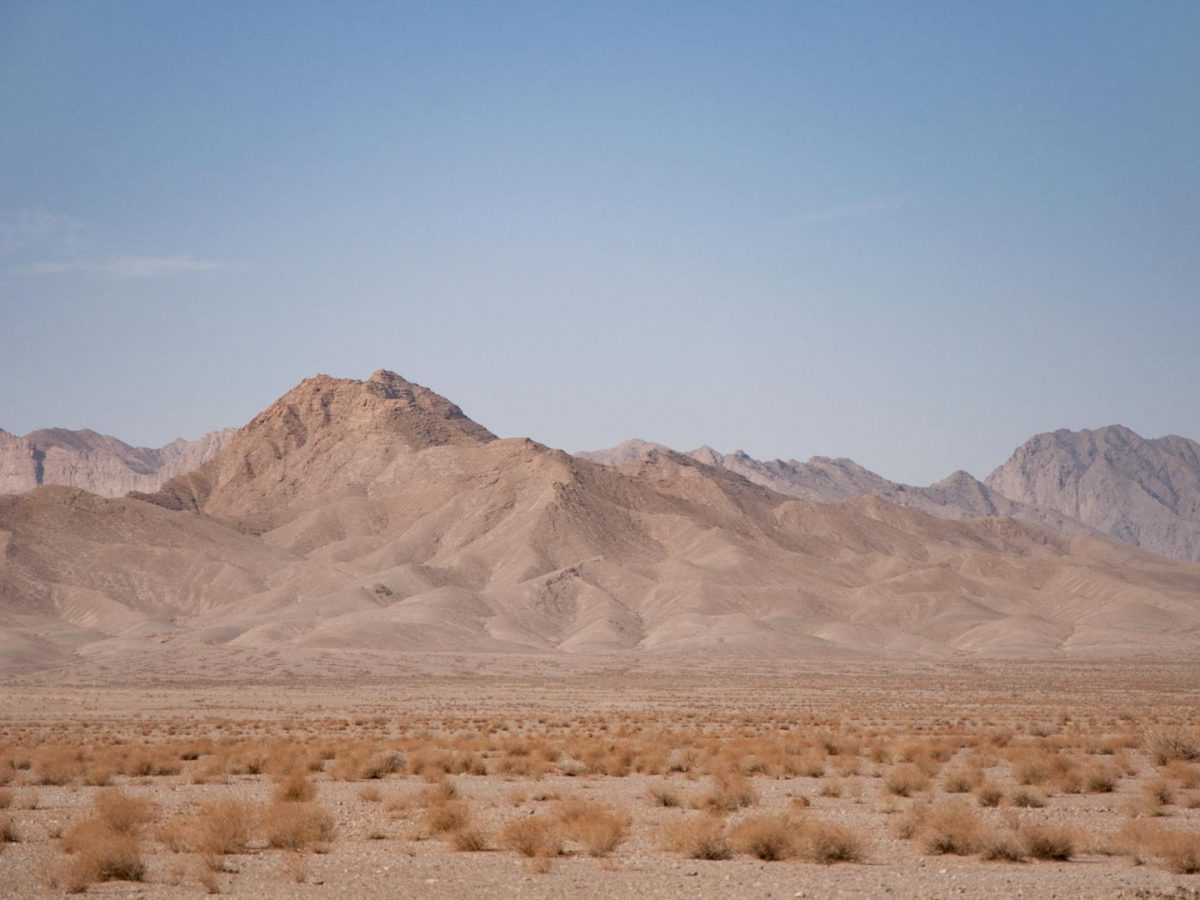 Situated at the confluence of the Mediterranean, arid west Asian and temperate semi-humid Caspian climatic zones, Iran is home to a rich and complex array of biodiversity, including the world’s few remaining Asiatic cheetahs. Efforts to protect its biodiversity, however, have been challenged by decades of economic sanctions and political isolation which began following the US embassy siege in 1979, and which were recently escalated by US president Donald Trump in November 2018.

When over 36 years of US sanctions against Iran were lifted by President Barack Obama in January 2016, following the signing of the Joint Comprehensive Plan of Action (JCPOA) the previous year, Iranian conservationists were hopeful that the support and international collaboration they had long been deprived of would finally become available.

However, less than three years later, scientists warn that the nuclear-related sanctions re-imposed last November by the Trump administration following the US withdrawal from the JCPOA will likely lead to serious repercussions on biodiversity conservation in Iran.

Isolated once again, Iranian and international scientists are calling for exemptions to the sanctions, in order to allow for the conservation interventions necessary to protect critically endangered species from going extinct.

Iran’s diminished ability to use its financial resources due to the freezing of assets abroad and banking sanctions, currency devaluation, increased inflation and declines in foreign direct investment creates economic stress, says Hakim.

Though it maintained a relatively high position due to oil exports, World Bank figures report the Iranian economy fell from 17th to 27th in the world over nearly four decades of sanctions. In 2018 alone, the Iranian rial lost 70 per cent of its value. “With fewer opportunities to engage in the global market and a weakened private sector, the public sector must then step-up and take on more responsibilities with fewer resources to try and sustain the country,” Hakim explains.

The shift to “survival mode” that is adopted out of necessity under sanctions does not allow for long-term planning, and under such conditions environmental concerns are often forsaken. In what Hakim says is an understudied field in general, even more overlooked is the impact sanctions have on the field of conservation and biodiversity. “Because Iran has a number of crucial environmental issues challenging its future development, such as water scarcity and air pollution, conservation efforts are placed at an even lower priority,” she says.

Sanctions reduce, and in some cases cut off, financial support for biodiversity research and conservation interventions, and limit opportunities for international collaboration and the transfer of knowledge and skills, which the field of conservation relies on.

In 2014, the US blocked more than US$7.6 million in international funding for several multiyear projects developed by the Global Environmental Facility (GEF), a subsidiary of the World Bank. One of the projects affected entailed support for Iran to integrate its obligations under the Convention on Biological Diversity into its 2011-2020 national biodiversity planning. Before funding was curbed, the GEF had provided nearly US$4 million in funding for biodiversity projects in Iran, including support for the pivotal Asiatic Cheetah Conservation Project.

Locally, sanctions affect the conservation budget, leaving conservation authorities and game guards with fewer resources to control protected areas and cover expenses related to personnel, equipment, monitoring devices, patrol vehicles and fuel, says Leili Khalatbari, a PhD candidate at the University of Porto in Portugal studying ecology and conservation of the cheetah. As currency devaluation and reduced spending power drive down people’s income, Khalatbari says they are more prone to poach or to illegally exploit and transform natural habitats.

Though the European Union and United Nations currently remain committed to upholding the nuclear deal, Khalatbari suggests it is the fear and possibility of “severe consequences” from the US that scientists anticipate will impact international cooperation and funding.

“Foundations with American donors are likely to refuse funding projects inside Iran, and even for those who are willing support these projects, they may find it very hard if not impossible to transfer funds, which we experienced even before the sanctions were re-imposed,” she says.

Scientists also anticipate experts may cease travelling to Iran to avoid future problems related to the Trump administration’s ‘travel ban’, and that purchasing the requisite technological equipment may also be hampered. Pre-2016, Khalatbari says scientists were unable to make online purchases from Iran, which made it a challenge to obtain equipment like camera traps and radio tracking collars – standard technologies used for wildlife monitoring. To circumvent this challenge often required finding volunteer passengers to bring the equipment into the country with them.

The race to prevent extinction

Iran is the most biologically diverse country in west Asia: its ecosystems support 192 mammals, over 8,000 types of plants, more than 1,000 species of fish and over 500 bird species, many of which are only found in Iran. Of these, 111 fauna and 165 flora species from Iran are currently on the International Union for Conservation of Nature’s (IUCN) Red List of Threatened Species – the global authority on the status of biological diversity.

No species is at greater risk of extinction in Iran than the Asiatic cheetah, which once roamed a vast area from the Arabian Peninsula and across west Asia to India, but today is found only in Iran, where experts estimate as few as 50 remain in the central desert region.

Khalatbari says many of the conservation measures in the species action plan for the Asiatic cheetah could not be implemented due to the lack of internal funds and the inability to obtain external funding as a result of the sanctions. Scientists fear the re-imposed sanctions will hasten the cat’s pace down the road to extinction.

The Asiatic cheetah’s status as “critically endangered”on the IUCN’s Red List makes it most at risk of imminent extinction, though Khalatbari cautions several other species are at particular risk of further endangerment, including the Persian leopard, the Syrian brown bear, the Asian black bear and several species of large herbivores.

To prevent the first continent-wide extinction of a big cat, the Asiatic cheetah, Iranian and international scientists are calling for conservation exemptions to the sanctions. They propose measures be put in place to protect biodiversity during armed conflict and embargo along the lines of existing measures that allow humanitarian relief.

Environmental issues do not have an equivalent to international humanitarian law, and the need for a fifth Geneva Convention that protects the environment at times of armed conflict and embargo, which has been raised before, needs to be revisited again, says Sarah Durant, a senior research fellow at the Zoological Society of London.

Durant, Khalatbari and other conservationists suggest that equipment and technologies that support the conservation of threatened species should be exempted from sanctions. “Likewise for information exchange and skill transfer, where the transfer of skills, for example via trained personnel, and information needed to safeguard threatened species should be permitted, in line with allowing humanitarian access for doctors and medical staff,” says Durant.

Khalatbari says that funding conservation projects should remain possible without barriers, “INSTEX, the transaction channel the EU recently set up with Iran to circumvent US sanctions to be used to sell food, medicine and medical devices, could be extended to include conservation-related transactions.”

Conservation is not a crime

Beyond the challenges sanctions pose to conservation, the crackdown on Iranian environmentalists over the last year has put Iranian conservationists and Iranian biodiversity at even greater peril. Several Iranian NGOs, academics and activists denied requests for commentary for this article due to the current sensitivity towards environmental issues and conservation in the country.

In January 2018, nine Iranian environmentalists were detained on charges of espionage, accused of using camera traps to undermine national security interests. One of the detained died in prison two weeks later under suspicious circumstances, while the rest were held incommunicado and denied due process for over a year.

The Center for Human Rights in Iran reports that three government agencies – the Department of Environment, the Supreme National Security Council and Iran’s Intelligence Ministry – have concluded the charges against all are baseless, and that the Iranian judiciary is holding out on forced confessions. Their closed-door trial is ongoing.

In response to the detainment of their colleagues, conservationists around the world are urging countries to better safeguard those who dedicate their life to protecting biodiversity for the benefit of all.

“All countries should safeguard conservation personnel; when conservationists have no freedom to operate, there can be no conservation and environmental protection,” says Durant.