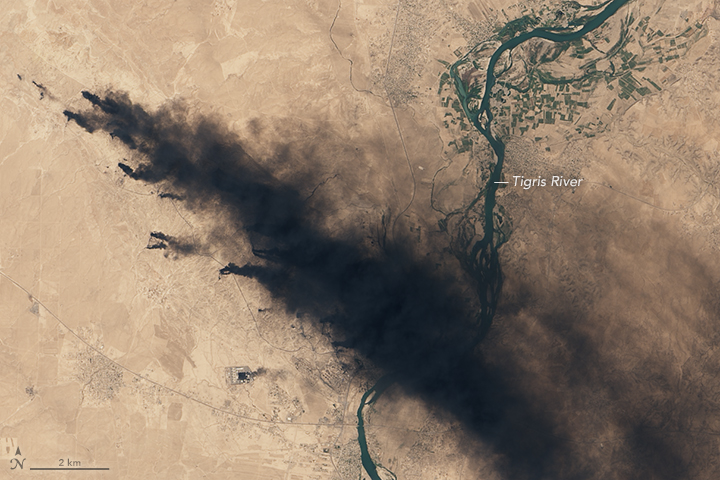 The case for engaging with militant groups to protect the environment

Competition over scarce natural resources is often a key driver of the tensions that fuel armed conflict in different corners of the world. Yet in the heat of battle, environmental considerations are often relegated to afterthoughts, as smoke from burning buildings clouds the skies and toxic byproducts of munitions poison the soil and groundwater. As former United Nations Secretary-General Ban Ki-moon said in 2014, “The environment has long been a silent casualty of war and armed conflict.”

Conflict-related environmental damage directly and indirectly affects the wellbeing of nearby civilians by threatening their health, ecosystems, livelihoods and economies. Accordingly, humanitarian organizations and experts are increasingly recognizing the need to address the environmental dimensions of conflicts—not just among nations, but among nonstate armed groups, as well.

With militant organizations more and more active around the world, the issue is more urgent than ever. According to a 2018 study by the International Committee of the Red Cross, the number of internal conflicts that involve one or more nonstate actors has more than doubled since the start of the 21st century, and more armed groups emerged in the six years between 2012 and 2018 than over the previous six decades.

Despite these trends, international efforts to engage with militant groups are woefully insufficient. Many expert observers point out that the existing international legal framework to protect the environment during armed conflicts, long considered inadequate, is even less suited to address nonstate armed groups, since it mainly focuses on conflicts between states.

“Historically, nonstate armed groups have been responsible for significant harm to the environment in conflict,” says Doug Weir, research and policy director at the Conflict and Environment Observatory, a British monitoring group. “If we are unable to meaningfully engage with groups like these, it creates a significant gap in environmental protection in areas affected by conflicts, with implications for people and ecosystems.”

Last summer, the U.N.’s International Law Commission, or ILC—whose mandate is to develop and codify international law—provisionally adopted 28 draft principles to better protect the environment before, during and after armed conflicts. The product of eight years of work, the principles are meant to address the gaps and weaknesses in environmental protection in relation to armed conflict. Yet while they were widely regarded as a significant and long-overdue achievement, they notably left out the conduct of nonstate armed groups.

“Non-state armed groups have not been meaningfully consulted as stakeholders in this process, nor have they been identified specifically as duty bearers,” says Jonathan Somer, the legal adviser for the Danish Red Cross. “Unfortunately, the elephant in the room has still not really been given a seat at the table.”

Last year, several states raised the issue of nonstate armed groups and their environmental obligations at the U.N. General Assembly, voicing support for a draft ILC principle addressing the issue. However, Stavros Pantazopoulos, legal and policy analyst at the Conflict and Environment Observatory, says it is highly unlikely the ILC will adopt a draft principle dealing with the matter. And even if it did happen, he says it would be difficult to agree on its content.

Militant groups’ approaches to environmental protection vary widely. Some, like the Islamic State, deliberately caused environmental destruction by detonating oil wells and setting fire to chemical plants while retreating from territory they had conquered in Iraq and Syria. On the other hand, the Kurdistan Workers’ Party, or PKK, a militant group that operates mainly in the Kurdish regions of Turkey and Iraq, have integrated conservationist provisions into their code of conduct.

Some experts contend that through increased outreach, many more armed nonstate groups could be convinced to improve their environmental conduct. Since taking office in 2017, U.N. Secretary-General Antonio Guterres has called on member states to expand efforts to engage these groups, although most remain reluctant to do so out of fear of lending them legitimacy.

As a result, engagement has been led by international humanitarian bodies like the International Committee of the Red Cross, which tries to integrate humanitarian principles into the militants’ operations and doctrines, sometimes by drawing on traditional or religious rules. Another international organization, Geneva Call, exclusively focuses on engaging nonstate armed groups using a range of tools, such as seeking concrete commitments from militants to respect humanitarian norms and monitoring them on compliance.

When it comes to environmental protection, however, cases of engagement are rare. In 2016, the World Wildlife Fund for Nature signed a memorandum of understanding with the Karen National Union—the political arm of the Karen National Liberation Army, a militant separatist group in Myanmar—in which they agreed to collaborate on forest and biodiversity conservation in territories they controlled.

In a less successful example, UNESCO in 2004 tried to convince the Sudan People’s Liberation Army, which is currently the armed forces of South Sudan but was then a guerilla movement, to halt poaching among its fighters and secure a withdrawal from the vicinity of Garamba National Park, a wildlife preserve in the Democratic Republic of Congo. The SPLA officially ended its presence in the park in 2005, but poaching continued.

Pascal Bongard, head of Geneva Call’s Policy and Legal Unit, says that although the organization has no direct experience working with groups on the environment, the issue may be taken up in a future research project. Bongard believes it won’t necessarily be more challenging to engage nonstate armed groups on environmental protection, given that many of these groups, he says, “fight, or claim to fight, for the rights of national, ethnic or religious minorities, which often include an environment, natural resources or ‘homeland protection’ aspect.”

However, humanitarian aid groups that rely on external funding may encounter resistance from some donors or governments that could seek to prohibit these kinds of interactions with militant groups designated by their governments as terrorist organizations—even for humanitarian purposes.

Even if outreach is successful, not all armed groups will be interested in engagement, and some may shun even the idea of international standards. “The goal of these actors may not necessarily be military victory,” says Eliana Cusato, an expert on international law pertaining to conflict and the environment at the University of Essex, “but to profit economically from the central government’s collapse and enduring absence of the rule of law by exploiting valuable resource commodities like oil, timber and minerals.”

However, Weir points out that groups with a higher degree of organization or long-term territorial control, or those that aspire to statehood, often develop environmental policies. Examples include the Revolutionary Armed Forces of Colombia, or FARC, the PKK in Turkey and the Houthis in Yemen.

Additionally, many groups see environmental issues as part of their grievances and would likely want to see greater protection for the environment. “By engaging them as stakeholders in terms of policy discussions—and not just to convince them to comply with the law—nonstate armed groups could contribute to efforts to improve standards,” says Somer. At the same time, they could be “made to feel that their opinion matters.”

This was first published by World Politics Review.